Blog: THE MOST BRILLIANT THING EVER

In my career in ROCK there have been many highs - playing live on Radio 1, the whole Hey Hey 16K business, gigging around the world etc etc - but on Friday something happened which pretty much eclipsed THE LOT. It was THIS: 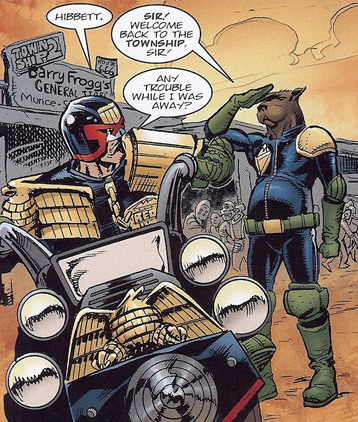 What you're seeing there is a character in this month's Judge Dredd Magazine who is NAMED AFTER ME!

REALLY! A few people have said "Are you sure it's not just a coincidence or something?" And i say "YES! I am COMPLETELY SURE!" for LO! this story is written by the GRATE Mr Al Ewing who a) is surely the HEIR to writing Dredd come J Wagner's eventual retirement b) i have met on a number of occasions and found to be VALID c) CONFIRMED it to me via the medium of twitter.

So just to confirm: OH MY GOOD GOD! There is a character named after me IN JUDGE DREDD!!!!! If anyone knows of a HIGHER HONOUR than this then, goodness me, you can keep it to yourself for it would surely BLOW MY MIND! You can keep your Mercury Prizes and your Brits - THIS is pretty much THE most exciting thing EVER! Is there a Judge Him Out Of Radiohead? I THINK NOT.

And if there is, don't tell me.

Crikey - thank you Mr Ewing, and thank you THARG THE MIGHTY for letting it happen. Now, how long until the Constable Hibbett Summer Special is ready?

i'd love to see you perform in a dog mask and mega-city 1 judge costume, in continuation of this. it's like you're a very niche mega-celebrity. when people ask me if i've ever met anyone famous, i always say 'i've met people who are famous to me' and cite people like you as an example.
posted 7/3/2010 by grilly

Lieutenant Dogtanian Hibbett might not have black hair and glasses but there is definitely *something* about him I recognise!
posted 8/3/2010 by Francis