I met with Mr S Hewitt at The Old Coffee House in LONDON'S WEST END on Tuesday night for the West Finale of Dinosaur Planet, feeling a bit NERVOUS. I'd had an Interesting Phone Call earlier on which MIGHT HAVE (but in the end, didn't) lead to something very exciting INDEED, and so THAT was on my mind, and also my little brother was paused, ready to catch the emergence of his daughter, Audrey Rickard Hibbett, who was to arrive later on, so i was worried THERE too.

Hello Audrey, by the way, if you ever GOOGLE yourself in the future - this is your Uncle Mark, worrying about you before you were even born... and then going to the PUB!

Anyway, we'd booked The Old Coffee House because it's one of the few pubs with a bookable upstairs rooms that was DEFINITELY in London's Fashionable West End, but it turns out to be a LOVELY pub. It's like one of those lovely pubs you have in Normal Cities with regular customers, a proper landlord, a good atmosphere where people break out into random conversations and a general mood of relaxed pleasantry BUT IN CENTRAL LONDON! It's like finding a decent chip shop in Trafalgar Square, WEIRD and yet very very nice indeed.

People gradually arrived - not a HUGE throng, and sadly not enough to allow us to legitimately call it a West End Sellout Show (we'll have to wait until Moon Horse fills The Palladium for that, I guess) but MORE then DELIGHTFUL enough - and it felt like doing our first couple of Edinburgh shows, with me and Steve stood at the door constantly looking to see if anyone else was coming. Once we were sure everybody who was coming had come, we BEGAN!

The first ten minutes or so (and intermittently throughout) were a bit shaky, on my part at least, probably due to the NERVES, but it soon calmed down and worked pretty well. We were VIDEOING it (in case we ever need to REVISIT it, and NOT AT ALL so we can look out ourselves, not at all) so I hope to be able to demonstrate this online in the near future! Kerry was our Special Guest and was rather excellent, and by the time we'd finished I found myself excited ALL OVER AGAIN by the victory - it's going to be hard work to say goodbye when this is done in a week or so!

Once the show was over, I returned to the "stage" to make a presentation - as discussed MANY times over the past year, Steve has been working with me doing his APPRENTICESHIP, and I thought we ought to mark the END of this part of his education, THUS: 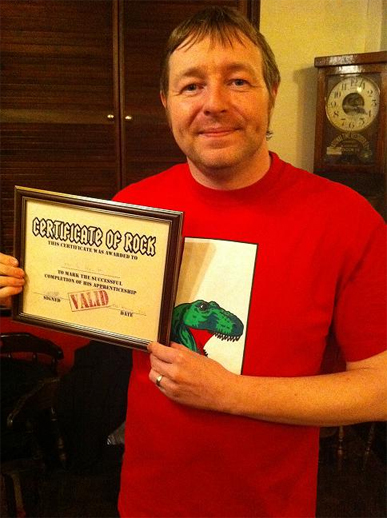 Congratulations to Steve - we look forward to your postgraduate work! Needless to say such an auspicious occasion needed some celebration... and that's why I couldn't write about it yesterday. Ow!