When I got to the King & Queen last night for Totally Acoustic the place was HEAVING with people, all having a lovely time and making a RIGHT old DIN. I had not heard the like of it for ages! Upstairs all was rather more TRANQUIL, and I discovered that Mr S Hewitt had already got there and set out ALL the tables.

We had a sit down and a brief run through of the abbreviated version of Dinosaur Planet that we're going to be doing at The Event next week. We'd managed to CONDENSE it down to 20 minutes and it all seemed to work... except that there's going to be a LOT of characters suddenly appearing for no reason during For The Fate Of The Earth!

Our acts for the evening, Jim'll's Brain and Jimmy McGee soon arrived, as did... well, THREE other people! It was VERY COLD out, also SNOWING, which might explain it, and I consoled myself with the thought that the podcast is getting HUNDREDS of downloads these days as I delved into THIS brief set:

I was more nervous doing THIS lot to six people than I had been for a LONG time, partly I guess because it was nearly all stuff that was OFF PISTE for my usual set. It seemed to work out OK though - I tried a New Arrangement for The Stores Of Not To Be as I'm thinking of RECORDING it for A THING, and Mental Judo seemed VERY apt!

Next up was the MIGHTY Jim'll's Brain. The crowd was gently growing now, reaching double figures during his set, but it should be NOTED that when I took the following picture of him about to go on there were still only the SIX of us: 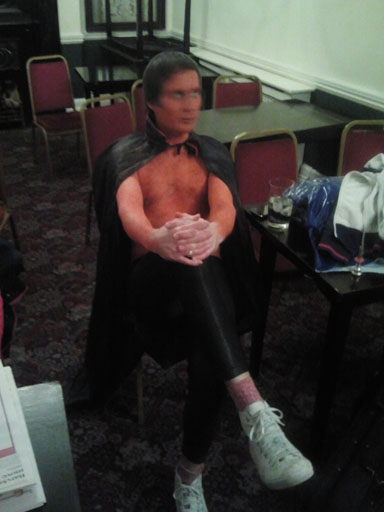 Ladies and Gentlemen: A TRUE STAR. He went on in this vein for his entire MAGNIFICENT set, not only doing several songs I'd not heard before,but also painted a COLOUR I hadn't seen him before - and how many acts can you say THAT about?

And finally another all round entertainer, Jimmy from The Bobby McGees. At various points during the night I'd had my usual YOYO THORTS about Totally Acoustic, BOUNCING as I often do between thinking "Maybe I'll just stop doing these soon" and "This is the BEST GIG EVER! MORE!". All thoughts swung to the latter when Jimmy was on, ESPECIALLY when he got me and Jim'll up with him to dance the Charleston. It turns out that dancing the Charleston is a) GRATE b) PEASY!

So a lovely evening ending up being had by all, and though the podcast won't be able to feature the VISUAL EXCITEMENT of either Jim'll's HUE or Jimmy's DANCE SPECTACULAR I do hope it'll be able to display a little bit of the JOY of such an intimate evening!