The journey to HIBBETTFEST on Saturday began at Euston Station, where I met Mr S Hewitt and found him to be UNNERVINGLY free of BAGS. The past several times we've been up to Kingswinford for the festival we've been lugging PROPS for whatever SHOW we were about to do, but as there isn't a show to DO this time around, it was just me and a guitar. It felt ODD.

SHOWS were very much on the agenda, however, as a goodly portion of the trip was taken up with me telling him the current PLAN for the NEW show, tentatively titled "I Dream Of Superheroes". By the end of it it became clear that there IS a pretty reasonable story - Steve went "AHA!" at appropriate points, looked suitably AFEARED when i outlined some of the more RISQUE elements, and seemed to be coming round to the idea of him learning UKELELE for it. I think it might just work!

We were met at Wolverhampton station by Mr K "Ray's Dad" Kirkham, and we were soon at the Kirkham Family Residence ready for the show. Hibbettfest has been happening here for about 8 or 9 years I think, and it's a wonderful thing to come back to every year, always finding slightly more children and a continuing DELICIOUS array of GRUB. Highlight of the Vegan Buffet this year was the homemade sausage rolls, which it turns out Ray's Mum had made, but it was all GRATE, tho it does feel weird to roll up at a buffet thinking, as usual, "Now, what can I eat here?" and finding that the answer is "THE LOT".

Mild panic was seeping around the festival site as Mr G Osborn had not been heard from, so when he did arrive, bearing news of a confused SatNav, there was much JOY and, after a half hour or so to get himself fed, he went on "stage" to ROCK OUT. It was MAGICAL, he charmed a garden full of people with SONGS, also CHAT. It was especially brilliant when Luke, Ray's nephew, decided to join in a DANCE ALONG, in full Batman costume. I didn't manage to get a picture of them together, but here's one that shows him in ACTION: 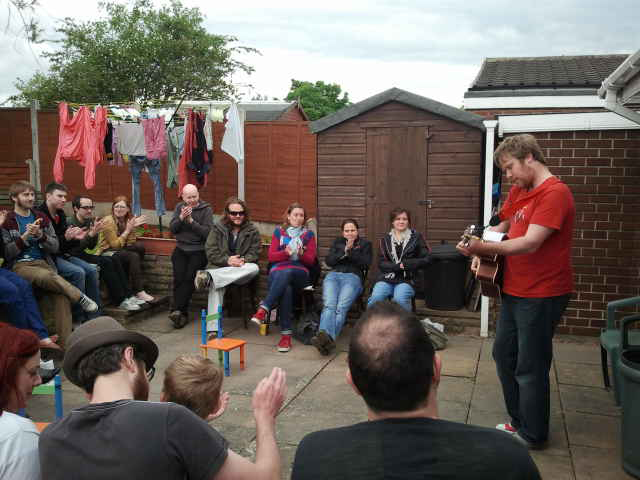 I thoroughly enjoyed it, right up until the end where I thought "Hang on, I've got to go next. I have taken BEER also, how on earth am I going to follow THAT?" He was REALLY GOOD!

Gav had also managed to do something that I'd never even thought of - got us a COMPERE! For LO! Ray had been persuaded to carry out MC duties, introducing Gav and announcing the INTERVAL. He'd complained about it, but by the time it was MY spot he was MR SHOWBIZ, doing GAGS, telling TALES, encouraging APPLAUSE - THE LOT. I sense a career around the Professional Comedy Circuit calling! I thus came on to the "stage" (patio) to a healthily warmed crowd, and did THIS:

It all seemed to go WELL - I started off by explaining that this would be a *HITS* set rather than the usual SHOW, due to Steve's OLYMPIC COMMITMENTS... and then had to HAUL the ATTENTION back to ME after everyone got (rightly) all excited about it. I was joined by Luke for much of the set, with young Josh helping out during Do The Indie Kid. It was lovely! I've spent the past few years doing SHOW SONGS and (at Totally Acoustic) trying to do batches of older songs I'm unfamiliar with, so being free to do the aforesaid *HITS* is thoroughly enjoyable - here's a LIVE SHOT that Ray took, demonstrating how happy I was about it, also the appearance of BATMAN: 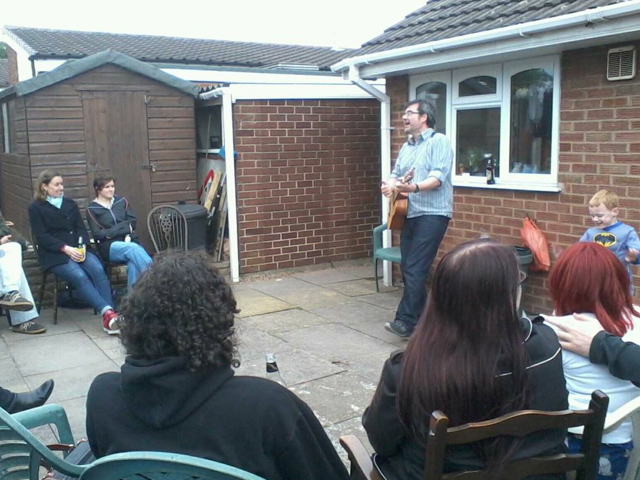 Afterwards there was CHAT and also BOOZE. Everyone had BEER, Ray's Mum was wandering around offering WHISKY and RUM, Ray's Dad brought out some homemade cider he'd won in a RAFFLE, and we all tried some RHUBARB WINE that Ray had made some years ago. The Rhubarb Wine was, I must say, SURPRISINGLY NICE. It got to a point where I ended up thinking "Everyone is SO CHATTY and saying EXCITING and NEW things! What is going on?" It has been a while since I've been at a gathering where nearly everyone was QUITE DRUNK!

Gav said his farewells, then so did the rest of us, and soon the TAXI was here to take us back into town for EVEN MORE BEER in the Wellington. It was thus a VERY JOLLY Hibbett & Hewitt who staggered into New Street Station (STILL AWFUL), raided M&S, and got ensconced on the train. We decided it would be a good idea to BOTH listen to "This Leaden Pall" on our seperate iPods, but something MYSTERIOUS happened: I distinctly recall listening to the first two songs, but then suddenly we were at Watford Junction. Eh? That's usually at least an HOUR from Brum, not 10 minutes. I turned to ask Steve what was going on, but he was FAST ASLEEP, like some Gentleman Of A Certain Age who had been drinking BOOZE all afternoon. Bless! He missed the whole TIME TRAVEL bit!

Back in London at such HIGH SPEED we headed for the tubes and made our way home, having had a MARVELLOUS day out. It was the best Hibbettfest EVER!