Blog: Quite A Day

I had Quite A Day yesterday. It started when I got to work to find my computer was KNACKERED. The day before - a Wonderful Wednesday - our computer chaps had run some Windows Updates on it, while I was Working From Home, and, as so often happens, this had DONE FOR my machine. One of them came back to try and fix it, so I nipped downstairs to the ULU Pool for a SWIM.

Upon emerging from the pool, having SWUM, I realised that I had forgotten my TOWEL. What do you DO in a situation like this? It turns out that PUSHING water doesn't really work very well, so I dried AREAS off with a spare t-shirt, and then ended up being on of those old blokes you sometimes see in GYM changing rooms, stood drying themselves off with the hairdryer. I always thought they were just WEIRD, now I think maybe they are just FORGETFUL. It was actually Quite Pleasant!

I got back to find my computer GONE, so spent a happy half hour doing PUZZLER (i like Puzzler) before being told it was going to take AGES to fix, so headed off back home again. I was, however, due out AGANE that evening so, after some POTTERING ... i mean, WORKING, I got the tube to Liverpool Street and wandered up Bishopgate to meet Mr S Hewitt. We were due to go to Phoenix FM that evening, but had arranged to meet up beforehand to do LINES (NB from Total Hero Team not DRUGS, obv).

We met in a "new" pub called The Crown And Shuttle, just between The City and Shoreditch. Its location meant it was RAMMED with BOTH Shoreditch Tossers AND City Wankers, more the latter than the former though at the time we met. HOWEVER the pub itself, and the staff and many other drinkers were all REALLY nice - the building had been derelict for YEARS but they've renovated it dead nicely (similar to pubs like The Red Lion round my way, all bare brick and bits dropping off, but CLEAN) and they had some DELICIOUS (if EXPENSIVE - Ł4.40 a pint!!) beer. You're always going to get OAFS and TWITS in that sort of area, but it's VERY good to know there is at least a decent pub there!

Having had a couple of BEERS and gone through the Revised Show (as with last week, we're making an effort to get properly to GRIPS with the shortened dialogue) we went and got a TRANE to distant BRENTWOOD, where we were due on the Eddie Curry show on Phoenix FM. Upon arrival we got a TAXI out to their new studios, and when we told the taxi driver what we were up to he tuned into the station. I've only ever heard it via the interweb before, it was EXCITING to hear it on Actual FM Radio!

The excitement CONTINUED when we got the The Brentwood Center, a 1970's vintage Proper Old Fashioned Leisure Centre (much like The Deepings Leisure Centre where I spent MANY HOURS as a child). They were ALSO playing Phoenix FM in the reception area - which means that, a few short minutes later, me and Steve would be BOOMING OUT throughout the building!

We got directions and went and found Eddie/Paul in his new studio. This was about the eighth or ninth time I've been to see him, and it's AMAZING to see how far he's come. The first few times I went to Brentwood he had a Community Licence, enabling him to broadcast for a couple of weeks a year from a tiny little room in a Community Centre. Now he's the full-time controller of an actual real life commercial radio station broadcasting all day every day! As he said, he had a mid-life crisis and he's making it work!

After a bit of chat we got set up and then went on air for ANOTHER bit of a chat, about the history of our shows and what this one's all about also. Here's a picture of us JUST about to do so: 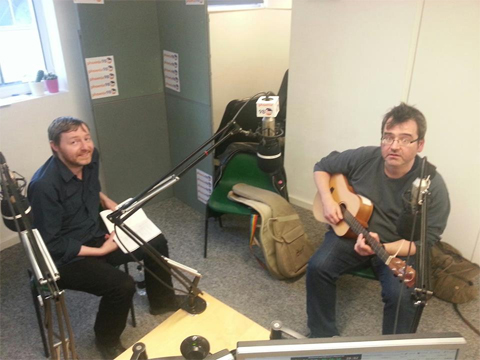 NONE MORE ROCK! Amongst the verbiage we played Get Over It (apologies to any Brentwood residents whose speakers BLEW when I began the song at FULL BELLOW), I'm So Much Cleverer Than You and I Want The World To Stop, and it all seemed to go off pretty darn well. We finished up about nine o'clock, shook hands, and headed off back into the night for another taxi, a train, and then another train (Steve) and a walk home from Maryland (me).

It had, all in all, been Quite A Day. But quite a GRATE one!