Blog: A Tribute Album Of My Very Own

It's been an ENORMOUS weekend during which I have done LOADS, but before I talk about any of them I really have to mention THIS: 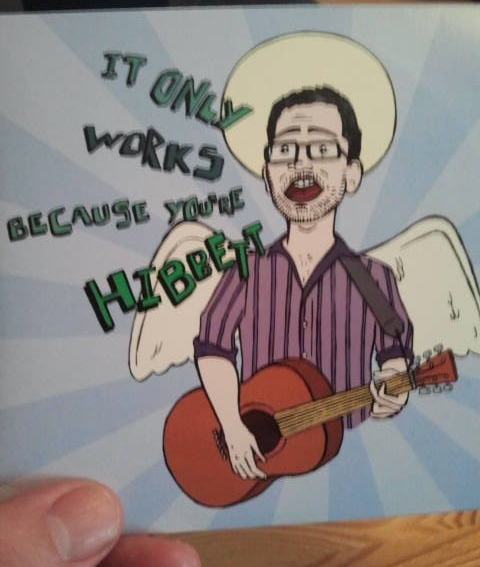 This, ladies and gentlemen, is "It Only Works Because You're Hibbett", a tribute album TO ME!! With LOADS of my favourite people doing MY songs - LOOK! Here's who's on it!

I had absolutely NO IDEA that such a thing existed - it was all put together IN SECRET by the marvellous Mr Ray Kirkham who handed me 20 copies of it in the back garden of his parents' house at Hibbettfest over the weekend, and I was COMPLETELY STUNNED. So STUNNED, in fact, that for possibly the first time in my life I asked people to STOP LOOKING AT ME as I struggled to take it all in - it's basically nearly ALL my Pals In ROCK spending the past year or two NOT TELLING me that they were all DOING this!

Since getting home I have listened to it three times and it gets MORE AMAZING each time I do so. When I saw the tracklisting I assumed that everyone had quickly knocked something up but GOODNESS ME NO, there are some ENORMOUS versions of songs on there that have clearly taken AGES to do. I was astonished and VERY PLEASED INDEED.

Ray is going to make copies of the album available for sale, and will be doing an Electronical Download too, so you'll be able to hear them soon, but in the meantime here's a whole VIDEO from Geoffrey and The Livingstones to keep you going:

*ahem* This link will get you a digital OR phyical copy, should you be interested http://showyrinlove.bandcamp.com/
posted 28/6/2013 by Ray