Blog: Are We Nearly There Yet?

Today I ordered our FLYERS for the Edinburgh Fringe - we're sharing them this time with the lovely people at Stand Up Tragedy thus DOUBLING the handing out of flyings and HALVING a) costs b) Environmental Impact. CUNNING huh? Here's what our side looks like: 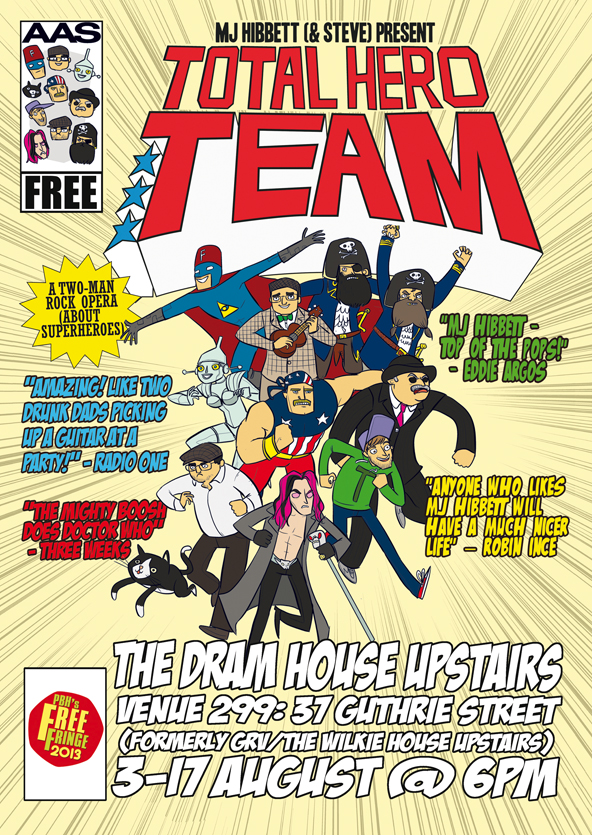 Now that THAT'S all sent off and paid for, that's pretty much ALL the jobs done that need doing before we get up there. Obviously there are SHOWS to do - London on Tuesday 9th, Buxton and Manchester on the 13th and 14th (details here) - but that's ALL we have to do. All of our trains, accomodation, publicity doings (the final part of which was popping into the Camden Head last night to drop in posters. "OOh, lovely!" said the young lady behind the bar, and I was forced to agree) and so on are completely BOOKED. In theory the next Edinburgh Fringe-related thing I need to PAY for will be my first pint of DEUCHARS when we get there.

I cannot bloody WAIT. Yesterday I took a stroll on Google StreetView from our venue round to my favourite curry house, Red Fort, and I've been looking LONGINGLY at pictures of The Halfway House, one of my favourite pubs. Four weeks from RIGHT NOW we will BE there, hopefully nursing a gentle hangover, helping set our room up in the venue, wondering whether to have chips for lunch. I have a feeling it's going to be GRATE.

One thing IS bothering me though, and it's THIS: The Deuchars Award. To enter you video yourself doing SOMETHING, including the phrase "You're due a deuchars" somewhere, and the winner gets Ł750 and, if they like, a gig. Now, on the one hand, a pile of CA$H would be lovely, and it'd be a nice bit of publicity for the show, but on the other, I feel mildly queasy about saying "You're due a Deuchars". I'm not sure why though - i bloody LOVE Deuchars IPA and it's a FAIRLY LARGE part of my festival experience. I shall have to consult with Mr S Hewitt about it I think, but any THORTS about whether I/we should do it would be very welcome in the comments section. The last time I did something like this was "Boom Shake The Room" for the late lamented Word Magazine, and that worked out PRETTY WELL!

The main thing though is this: it's not long until we're actually THERE! Trudging up and down hills, visiting lovely pubs, bumping into pals, seeing shows, eating curry, and SHOWING OFF. Come on August, hurry up!

I reckon if you do it in song form you'll be alright. "I bloody LOVE Deuchars IPA" is a rather charming lyric too and should be included in the musical offering.
posted 5/7/2013 by Markie

Don't forget to take a bottle for Red Fort! It's BYOB! If you can get to Mother India which is a street or two away I'd recommend that more- possibly my favourite curry house in Edinburgh. And the pub nearby called The BrassMonkey is ace!
posted 8/7/2013 by Robert K