When we first walked into our Student Lodgings in Buxton I was reminded of my own days staying in similar bedsits, and overnight I was reminded once again, being woken several times by people storming around, slamming doors and, at about 4am, ringing the doorbell repeatedly which rang out clearly THROUGHOUT THE BUILDING. Aaah, student days!

Steve and I rendezvoused at noon and sloped round the corner to have a LOVELY breakfast in The Hydro Cafe - I had SCRAMBLED TOFU, which I'd never had before. It was NICE! I also noticed, in the corner of the room, a man who looked a LOT like George Formby. It felt like The Spirit Of George had come to visit us!

We strolled back through picturesque Buxton to our DIGS and set to our big project for the afternoon: recording a song and video for the Deuchars Beermat Fringe. This is the competition I mentioned the author day - the idea is you do a SONG about Deuchars and they give you a PRIZE. I did wonder whether this'd be SELLING OUT but everybody I mentioned it to seems to think it'd be fine (it's a NEW SONG), and anyway: I bloody LOVE Deuchars IPA!

So, we recorded Steve's vocals (I'd already done mine) and then set to MIMING to it in various parts of the bedsit in various hats, recorded on my phone with the track playing through Steve's phone. MODERN! We did a pile of these, and then set out into Buxton itself to film some outside-y bits. It turns out that Buxton looks a LOT like Edinburgh, so we'll probably just pretend it IS, standing in like Cardiff does for London in Doctor Who. We had FUNTIMES filming each other titting about around the town, and have a pile of clips to splice together. The only downside of the project is that the song is VERY CATCHY INDEED and is STILL in my head days later!

That done we went back and listened to the end of The Cricket (EXCITEMENT!) then handed the keys back to the landlady (who was very nice and popped round to get them specially) before returning to the venue, where we met Messrs G and J Williams. Gareth was taking Jude out on a FUN DAY because it was his (Jude's) eighth birthday, and that included a visit to the show. It also included some TERRIFYING Jenga building, as can be see in this picture: 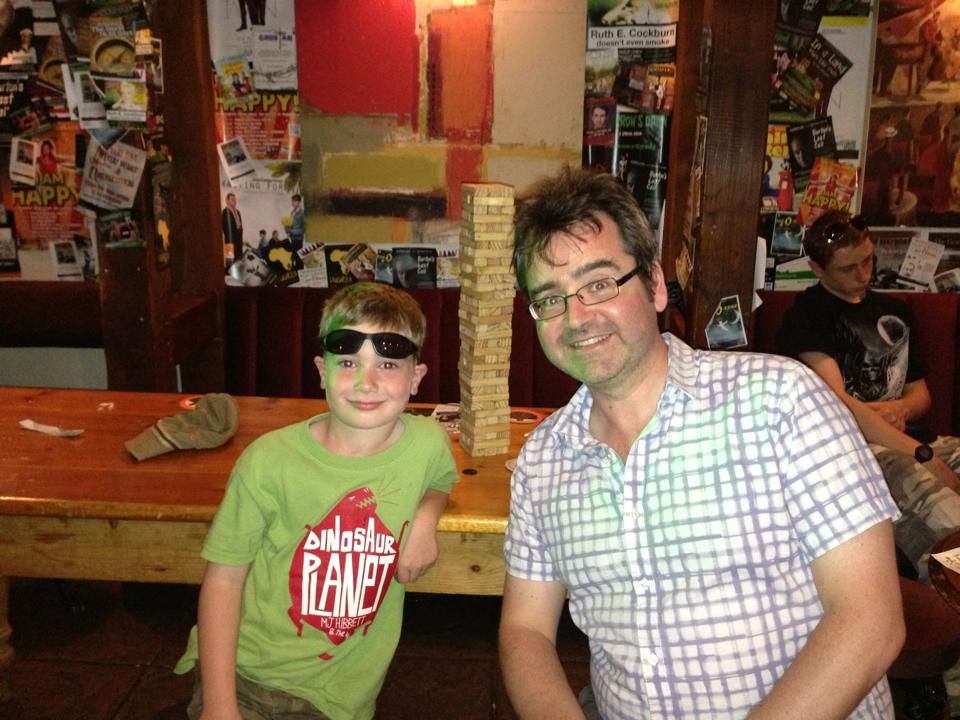 MAN ALIVE, we spent the entire show waiting to hear that tower collapse, but it was still standing when we left. PHEW!

Just before we went on GEORGE FORMBY returned! I was astounded - was he coming to see us? Was the Spirit Of George coming to give his blessing to "Come On Pussy"?!?

No. He was there for something else. Oh well.

The show itself was, again, DEAD GOOD. We had a slightly smaller audience than before but again they gently allowed themselves to get into it, and there were smiling faces aplenty at the end as I handed our badges and free CDs. We're giving away copies of Forest Moon Of Enderby to everyone who comes, and I was using this weekend as a test to see how many people TAKE one. I had, as usual, over-estimated the number of CDs I'd need - most people DO happily take a copy, but I had not accounted for the fact that COUPLES only need ONE copy between them. This is good, as it means I don't need to LUG so many to Edinburgh with me... but does mean I'll still have hundreds left at home at the end of the run!

With the show done we said our farewells and wandered round the corner to Buxton station, where the long awaited PANIC was due to commence. We had two hours to get from Buxton to The Kings Arms to start the show - in theory all would be well, but as the train slipped out of the station, bang on time, i couldn't help but worry. Everything else had gone so easily, would our luck hold out?

Ah, it really was a fantastic show! I dont know about the spirit of George Formby, but the spirit of Mrs Slocome was well and truly alive during "Come On Pussy!" Feel free to use this quote on your Edinburgh posters: "Total Hero Team was my favourite part of the best day of my life!" (Jude aged 8).
posted 16/7/2013 by Gareth