We haven't had any graphs round here for AGES, so let's get that rectified: during our run at the Edinburgh Fringe we kept a record of how many people came each day, how much they put in the bucket, and how many free CDs we gave out, which allows me to present you with the following slices of PURE FACT!


Fig 1: Cash Taken And CDs Given By Number Of Audience Members 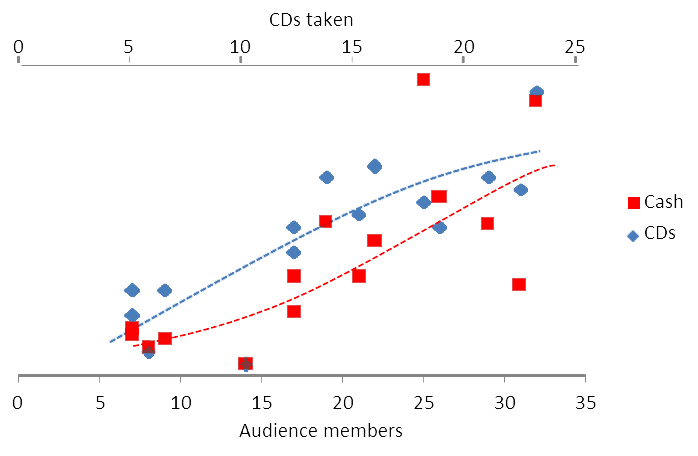 This shows that, as you would probably expect, the amount of cash you get in the bucket and the amount of CDs given away tends to increase the more people you have in the audience. As you can see though, it's not a straightforward relationship - one of our smaller buckets came from one of our biggest audiences. It does look like the increase in CDs taken slows down the more people you have, and I'd guess this might be due to the increased likelihood of having couples/families in bigger audiences (who take one between them). Also you tend to get more money per person with a larger audience - this might be because a bigger crowd leads to more laughter (most of the time) and so people think they've had a better show? 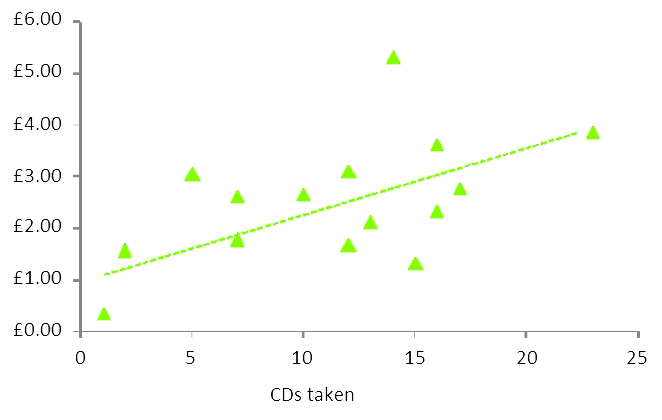 This one looks a bit more straightforward - the more money people put into the bucket (on average) the more CDs you give away. Note that this is the average money, per person, and not the number of people, so it could be that the more money put in (and thus, arguably, the more the audience wished to show their enjoyment) the more they felt able to take a CD. 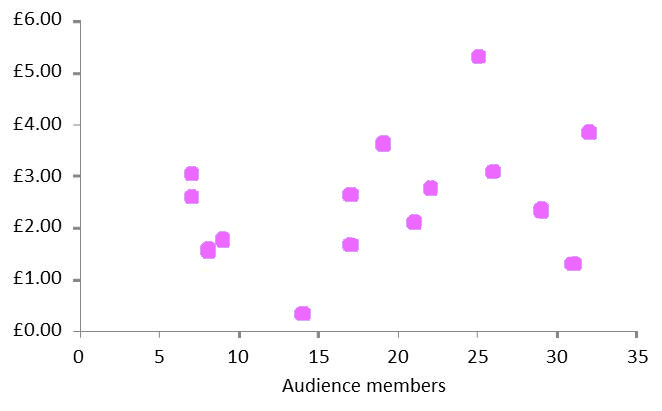 By "Average bucket" I mean the amount of money each person put in the bucket on the way out of the show. Not really sure WHAT'S going on here - if anything it shows that you can't predict how much money you'll get based on how many you had in! The amount does tend to increase according to audience size, as mentioned before, but you can clearly see how changeable it was.


Fig 4: Final Facts * we ran out of CDs on the last day, but there were only a couple of people left to leave and they didn't seem to mind


So what, in conclusion, do we LEARN from all of this? Well, the key thing that comes out of it for me is that the PBH Free Fringe is VERY MUCH on an even footing with paid for venues for the amount of CA$H that comes in. When we were on the five pound Fringe we had to pay an admission fee to the organisation, rental for the venue, and then I'm pretty sure we paid them a cut of the ticket sales too, which meant (as far as I recall), we were getting in less per person than we did this year. If we'd done one of the big paid for venues we could have charged more, of course, but that costs a HUGE amount of money just to get a room, and they do expect you to spend yet MORE on publicity.

But it isn't about the money - obviously, if it WAS about the money we wouldn't do the Fringe at ALL!! Being part of the PBH Free Fringe is more about being part of something a) delightful b) RIGHTEOUS that harks back to the proper spirit of the whole thing i.e. being an open access festival of ARTS rather than just an expensive showcase for the corporate comedy industry. We were very happy to be part of it, and hope they'll have us back next time we do it!