Blog: The Past And The Future

We had an ACTION PACKED weekend of HOUSE MOVE THRILLZ this weekend. We had FOUR people in the flat - one was a CHUM that came for a look, one came to fix a cupboard, one to fix the taps, and another to discuss the REMAINING stuff that needed fixing. Not satisfied with this i booked some MORE people to come and SHIFT stuff around - I think I've already had MORE people round in our first fortnight than I ever had to visit in the previous decade at the old place!

Talking of which, we were back round at our previous residence on Sunday to do some packing up. This mostly involved packing things in BOXES, although I also did a little bit more chucking away, including, sadly, sending two old friends to ... er... "live on a farm". Here's a picture of the tender farewell: 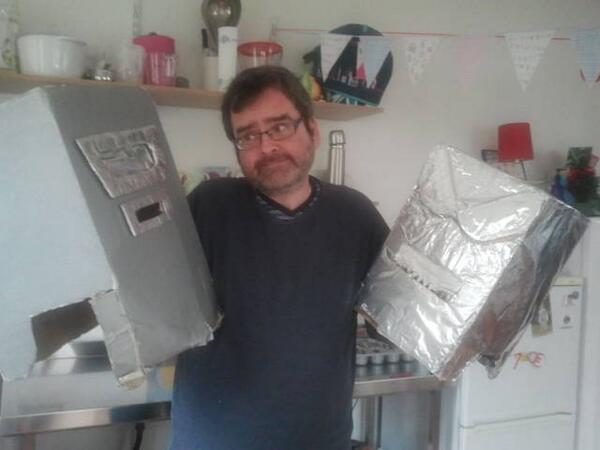 These are, of course, the ROBOT HEADS from the live version of Dinosaur Planet, last used at Green Man Festival and in a VERY delapidated state ever since due to getting AN HOUR OF POURING RAIN on them. I consulted with Steve about their future (i.e. asked if he wanted to keep them at HIS house) and we decided to let them go. I'd've liked to have given them a VIKING FUNERAL, but neither Waltham Forest NOR Newham offer this as a disposal option, so alas it was "the farm" for them.

I also discovered a ROCK MEMENTO as I cleared out - something we picked up on TOUR, during a FESTIVAL WEEKEND. Other bands might have used underwear, scars, or DISEASES as their tour memorabilia, I have a set of Birds Of England tea-coasters that I got from a National Trust shop when we went to look at William Wordsworth's house in the Lake District. ROCK AND ROLL!

It wasn't all ROCK and PACKING, however - I went to see Gravity (GRATE!) and we both saw Anchorman 2 (OK but you're probably fine watching the original and imagining what a not-quite-as-good remake would be like), AND i bought a NEW COMPUTER. It used to be that when you got a new computer you'd spend ages setting it up by adding new programs that you need, whereas now you spend ages deleting all the programs you don't need that come pre-installed. I also spent a few hours trying to stop Windows 8 being Windows 8, but otherwise it is PRETTY FAB and FUTURISTIC, with all SORTS of new exciting connections. When the new laptop went "Oh, here's all your Kindle Purchases too, by the way" I emitted an audible WHOOP!

Later that same day I spent 15 minutes trying to work out how to OPEN it. I checked buttons, read the instruction manual, GOOGLED it on my phone... and then realised I had it back to front. I guess we can't blame ALL technical issues on Bill Gates.