A very busy weekend started well with a lunchtime meeting with Mr John Dredge. He and I have been having regular lunchtime meetings during which we NAG each other into writing sketches for Radio Shows. This has turned out to be an EXCELLENT scheme - not only have we forced each other to write several scripts, it's also been a DELIGHTFUL way to spend a lunchtime and also produce THORTS.

For instance, just before we finished I was telling him about my idea for a 2015 Edinburgh show, which would roughly be about lower division football, possibly called "Proper Football". I'd told The Audience In My Auditorium about it earlier in the week and she'd said "That sounds boring", and John said pretty much the same thing. I had to admit he could be right, and wailed "I just need to find something to do a show about that other people are interested in but that I like A LOT also." "Well", he said, as we put our coats on, "you like The Beatles."

And there and then an IDEA presented itself, fully formed, with such INFINITE BRILLIANCE that it was all I could do to remain standing. I'll not go into it in any depth here, so I can check if i can DO it or not, but I will tell you it is codenamed "Project G" and is AMAZING!

A couple of hours later I met Mr S Hewitt at St Pancras, ready to catch our train to Leicester and the comedy festival for the "final" (unless we do it again) performances of Total Hero Team. On the way I told him about "Proper Football" and he looked distinctly unimpressed, but that was FINE as it was just the lead-in to telling him about "PROJECT G". He tried to look thoughtful but I could tell it was BLOWING HIS MIND. Here is photographic evidence of it happening: 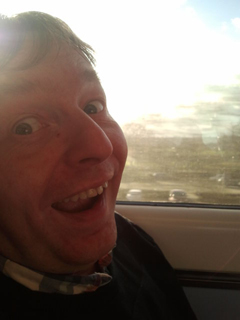 Speaks for itself, I think.

We soon arrived in Leicester, checked into the Ibis (usual suite, though this time I had a WHISTLING WINDOW which I ended up spending MINUTES fiddling about with to stop the INHUMAN HOWL that came from it when the wind blew), watched "Pointless" (TOURING!) and/or Curling, then met up and strolled over to the Criterion for the show.

We met this year's students (students from the Festival Management course at the Poly/DMU always do the door at The Criterion during the festival, it's VERY handy), ate some lovely Pizza, drank some lovely beer, and waited to see if anyone would be coming to see us. As it happened eight people did - this is our lowest ever audience for a Leicester Comedy Festival show, but VERY FAR from our lowest audience for this show, and also they were DELIGHTFUL, chuckling throughout and applauding wildly at the end. I thoroughly enjoyed DOING the show too - as ever, it's only when we get to the last few performances that I think "HA! I could do this forever, it is a) peasy b) fun" and, as ever also, I worked out a NEW BIT that FINALLY made sense of the "Thanks... but no thanks" line at the end!

All done we wandered over to The Swan & Rushes for a PINT and further discussion of how Project G might be enacted and then to The Ale Waggon where, slightly bizarrely, we bumped into a pal of Steve's! We had a lovely chat then Steve went off for a NIGHTCAP, while I, suddenly FLAGGED, went home. It had been a long but MARVELLOUS day, and a GRATE start to a weekend that would play out similarly!