The last day of our tour dawned, for me, just after 9am with a MASSIVE KLAXON going off. I LEAPT out of bed... then got back in, sure that if it WAS a fire then someone would tell me later. Gav leapt so far out of HIS bed, it later turned out, that he ended up in a nearby Weatherspoons having breakfast, and discovered that the KLAXON had come from the pub next door to the hotel, who liked to test their KLAXON about once a week. If I had a KLAXON I'm sure I would test it as often as I could too, but I'd like to think I'd wait until later in the day.

Shortly before NOON Gav and I regrouped, and hopped into his car for the 40 minute journey to Nottingham... which took us nearly two and a half hours. His SatNav wasn't working to start with, so we tried to navigate BY INSTINCT. This wouldn't work well under the best of instinct-navigational conditions, and it definitely didn't work in BIRMINGHAM, which has been legendarily designed to CONFUSE. Even when the SatNav DID come into action we kept going a bit AWRY, mostly because we were swapping HIGH POWERED TALES OF ROCK. Well, i say "swapping" - an outside observer might have said that it was mostly me YAKKING ON.

We eventually made it to Nottingham, parked in an UPSETTING CAR PARK (all the corridors and ramps were too short/thin, and it seemed to be upside down), got me checked into the Ibis, then went for LUNCH. Suitably refreshed we embarked upon an Afternoon Out. Gav bought a toy Robin Hood Bow And Arrow in the Tourist Information Centre which gave me a PROUSTIAN RUSH as I'd had one exactly the same when I was about six, then we went to Forbidden Planet where I met Ed, who I used to know in Leicester but hadn't seen for about 15 years! After all THAT excitement we went to Nottingham Castle for a stroll through the garden, an ice cream, and a look at the gallery. Gavin TWINKLED at the lady on reception SO MUCH that she let us in for a pound each - move over Motley Crue, rock and roll has NEW KINGS!

Sated by culture we went back to the car and drove to distant Sherwood, where our venue for the evening was located. I'd never heard of The Guitar Bar before, but was won over by it IMMEDIATELY. It's sort of the function room for Hotel Deux, a big very old-fashioned hotel to which it is joined by a proper old-fashioned BAR, with those round copper topped dimpled tables from days of yore (the 1970s). The room was garlanded with GUITARS, a POOL TABLE on the wall and ROCK memorabilia, and there were THREE Real Ales on tap, the first of which was bought for us by the landlord. LIKE!
The Addistock Sessions. The idea is you do one of your own songs and then a cover. I did (You Make Me Feel) Soft Rock and "Bring Me Sunshine" (which I'm considering learning up for Live Utilisation) and it was while Gav was doing a rather marvellous cover of "Don't Think Twice It's All Right" that Grace arrived, along with Jess aka Mrs Grace. We sat down for a quick chat (including tales of ROCK from our LONG night the night before) then Grace did HER session, we got soundchecked, then the four of us went to get CHIPS. Jess went for SLIGHTLY healthier options than the rest of us, and when she emerged to see us eating CHIPS said "Now THERE'S a photograph!" Here IS that photograph: 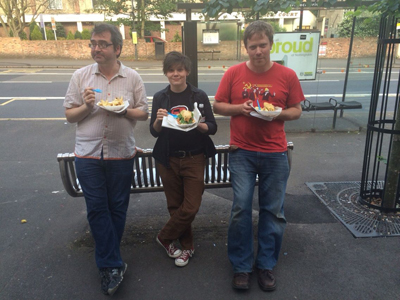 Next tour poster: SORTED! In fact there may BE another tour poster required, as it was agreed by all that we should TOTALLY do this again. There's a whole SLEW of towns we didn't make it to this time - Leicester, Sheffield, Brighton, Cambridge, Norwich, to name but a few - and it was a whole HEAP of fun that must surely be repeated.

The fun continued as it always has with a SMASHING gig. Gerry went on first and was dead good, then I went on and discovered how VERY VERY HOT it can GET in a small function room. It was the worst possible night to forget to bring my post-gig clean t-shirt as I was WREATHED in sweat, partly because of the sweat but also I think partly because of the RAGING TOOTHACHE I'd had all day. I BRAVELY carried on though, and did THIS:

Previously Gav and Grace have done the "La la la la" bit in the MIDDLE EIGHT of "Only Works" so I thought i would leave this BEST BIT to the end. Look upon my DELIGHTED face in this video of it, to see how much I LOVED this happening!

Good eh? Gav and Grace were as AMAZING as ever and, rather than me just SAYING that like I always do, allow me to DEMONSTRATE it with further videos:

And thus the evening and tour came to an end. There were more hugs and high-fives, agreement to further UK touring (around October/November) to be followed maybe by a trip to EUROPE, and then Gav gave me a lift back into town. He'd been hoping to stay with CHUMS, but they seemed to have forgotten about it, so he set off into the night to get as far South as he could - Chelmsford, it turned out - before having a little Car Kip. I walked back to the Ibis, KNACKERED, but full of the joys of ROCK. I really hope we DO do this again, it was GRATE!