The morning of Hibbettfest 2016 began for me at the UNGODLY hour of 6am (on a SATURDAY!) as I had a HECKLOAD of travelling to do. The plan was to zoom up to Cradley Heath for a band practice at 11am, go over to Kingswinford for Hibbettfest itself, pop back to Birmingham for a PINT and then get on ANOTHER train to Peterborough for Mr CM Smith's RETIREMENT do. PEASY!

It was a BUSY schedule which i was dealing with HEROICALLY by MOANING to The Validators, only to be told by Mr T Pattison that HE had been up since 5am and was flying into Birmingham from AMSTERDAM, having been in Ghana the day before. Honestly, some people make SUCH a fuss don't they?

The first part of the journey went fine and I met Mr FA Machine at Birmingham Moor Street Station just after 10am to catch our train to Cradley Heath. We arrived at 10:36am with almost half an hour to find our way to the rehearsal studio, which turned out to be NEEDED because the address given on their webpage was NOT, it turned out, where they actually were. "A rehearsal studio not having an entirely accurate and up to date website?" we said, STUNNED. "Surely not?"

The only place we could find open on an Industrial Estate at that time of a Saturday morning was a DANCE studio, so we went in to ask for help. As soon as we entered it was clear that we were in the MOST WRONG place for two men of distinguished age to be. The whole BUILDING turned and LOOKED at us, parents, teenage girls, and MORE teenage girls. "Are you lost?" said a kindly lady. WE WERE. She took us back outside, where a man washing his car said "Are you looking for the rehearsal studios?" He told us where they were (round the corner and up a different road). "It's round there somewhere," he said. "I can hear them playing LATE AT NIGHT."

Duly advised we went down a dirt track and discovered the studios HIDDEN, also ALARMINGLY CLEAN. I thought about complaining to the managament - the toilet not only had loo roll in it, but also SOAP! What is the world coming to when basic rules of rehearsal studios are not obeyed? I blame BREXIT.

Mr T McClure was next to arrive (I'd rung everyone to tell them the actual address) and after a short delay brought on by TRAFFIC so did The Pattisons. As we set up we discussed many issues of the day and agreed that, for the duration of this SUMMER OF ROCK (we're seeing each other pretty much every weekend for the next five weeks!) ALL REMARKS would be phrased in terms of SEARING Brexit-related SATIRE. This mostly came about because we had VOTED on what songs would be on our setlist and so there was much "I only voted for Lesson Of The Smiths as a protest" etc etc etc and resigning from things with heavy hearts and so forth. It was HILARIOUS and there is NO WAY that it will not STAY so until mid-August. If it does, no-one will ever know because, as Tom said, "What goes on tour REMAINS on tour."

Please feel free to pause a moment while GUFFAWS subside.

We RATTLED through the thirteen songs we'd chosen (13 because three songs came joint 11th, and 10 wouldn't have been enough), pausing for FURTHER LARFS and also FILMING ourselves for possible video use. After that we packed up then most of us headed off to Kingswinford, with Frankie returning to Derby for a Family Committment. As we said bye to him we got to say "See you next week!" which was RATHER LOVELY.

We arrived at the Hibbettfest site to find the event in FULL SWING. There was a garden full of lovely people, including Mr R Kirkham and his parents, several dogs and a LOT of small children. Hibbettfest may have started out as a small event, but over the 11 or so years it's been going it has grown primarily via existing audience members MAKING more audience.

Ray proclaimed the BUFFET open, we ATE (it was PARTICULARLY delicious this year - especially the AFTERS, of which I had HELPINGS) and then Mr A Hale got up to do a set. Originally there was going to be THREE other acts playing, but it had been reduced to one by the day itself and Alex filled the space ADMIRABLY, even though I was a bit distracted by the fact he uses my old guitar!

I had decided to PACE myself this year i.e. NOT drink ALL the beer, in order to be in a sensible state when I saw my parents in the evening. However I almost made a terrible ERROR when I said to Mr Kirkham Senior "Have you got any of that Rhubarb Wine left?" This was a beverage he had given me a couple of festivals ago, saying "I won it in a raffle". This had NOT ended well for me, so I was only JOKING but he LEAPT at the chance to get rid of some more, producing an entire DEMI-JOHN of it from the garage. I managed to avoid drinking TOO much of it - I think it may need another DECADE or so to mature properly.

Anyway, soon it was SHOWTIME. Here's what we looked like: 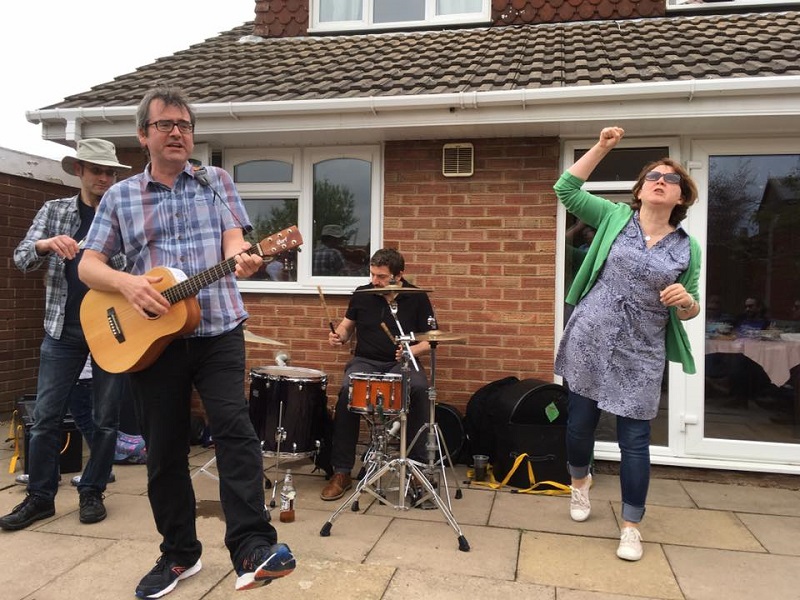 And this is what we did:

That might not be the EXACT order we did it in - we made up the list as we went along - but I should be able to CHECK*, as Ms L Handcock very kindly FILMED the whole thing for us, in the hope that we can use it ALSO for a future video. Hey, we live in the modern era, it's the way we're going to connect with THE KIDS! (* UPDATE: have checked, this now the correct setlist!)

It all seemed to go pretty well, then all too soon it was time to say "See you next week" to the rest of The Validators and hop into THE PARTY BUS aka the taxi into town which Ray had ordered. The PARTY decamped to The Wellington as is traditional, but ALAS I had time for just one pint as I had a whole OTHER party in a back yard to get to, of which more NEXT time!

It was, yet again, a BLOODY MARVELLOUS Hibbettfest. It really is my favourite festival roll on next year!