It was Pride weekend in Leeds this weekend, so when I rolled up I found it full of scantily clad people ALREADY DRUNK, being LOUD in the streets in search of good times and BOOZE and SHOUTING. There were also people getting ready for Pride! LEEDZ!

I checked into the hotel with some time to spare, so flicked through the channels. "There's nothing ever on when I do this," I thought, but then was AMAZED to find that "The Birth Of The Beatles" was on! I haven't seen this for YEARS - it's a TERRIBLE/BRILLIANT telling of The Early Beatles, where EVERYTHING anybody says is A Famous Quote OR A Future Song Title. It is ACE/DREADFUL - SO much so that I made Mr FA Machine watch a few minutes of it when I went to collect him. He was delighted!

Frankie, Mr T 'The Tiger' McClure and I were all staying in the same hotel, so we went together down the road to our venue for the evening's gig, The Wharf Chambers, which was ACE. It is a COLLECTIVE so had The Big Notice Board of EVENTS, VEGAN grub on the bar, LOADS of excellent beers and an all-round LOVELY atmosphere. It basically reminded me of The Mag in Leicester!

Downstairs we found The Family Pattison and Mr S Gibb, who was promoting for the evening. We got ourselves soundchecked, had a beer and a chat (some of us hadn't seen each other for TWO weeks!!) then wandered off into Leeds Actual to pay a visit to Zam Zams. We'd last visited this establishment seven years ago, while touring 'Regardez, Ecoutez et Repetez' and had enjoyed it so much that we took a picture, THUS: 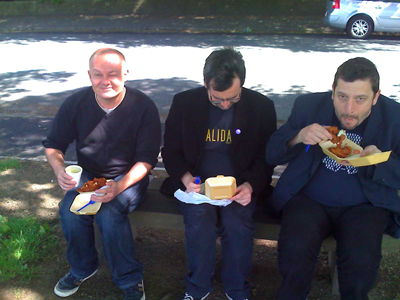 The return did NOT disappoint, as you can see BELOW: 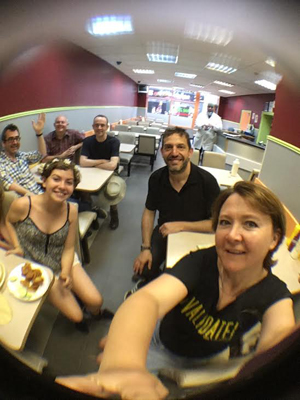 After a lovely curry tea and some DISCUSSION (possible London gig! this year's Christmas song!) it was a very FULL Validators that returned to the venue to the other acts, including an EXCELLENT Housemartins covers band. Cor, The Housemartins were good weren't they? Their set was FULL of HITS!

Shortly after 10pm we were ready to get onstage, but Stu asked that we wait a bit. "People like to have a chat between acts, and they're all outside", he said. This reminded me of an OLD TRICK that we used to do when I was in VOON and we played at The Charlotte. We noticed that people would NOT come into the gig room UNTIL they heard music playing, so rather than have everybody miss our first song we would begin with some JAZZ IMPOVISATION, so there was a NOISE to bring everybody in. THUS The Validators set looked like THIS:

It worked! "This is amazing", I thought during the first song. "We are SO IN SYNC we can improvise a whole song!" I mentioned this later and Tom said "Yes, it's almost as if they're generic", which SURELY can't be right can it? I prefer my version! 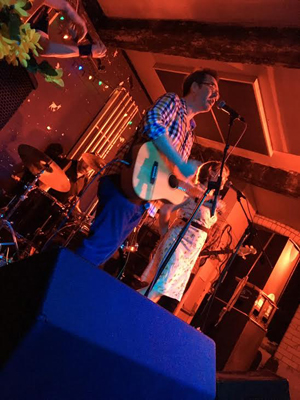 The set was THOROUGHLY enjoyable, for us at least - the sound was GRATE, we knew what we were doing (even when some people forgot the word to verse two of Do The Indie Kid and went the long way round to get to the chorus, everybody else managed to follow) and after WEEKS of (almost) CONSTANT touring it feels very natural to be YACKING onstage between ourselves and the audience. It was ACE!

It was also very HOT, so a clean shirt was needed before I could enjoy the rest of the evening. The Pattisons left shortly after the show, but the rest of us STAYED UP until WELL past 1am! ROCK AND ROLL!

The only sadness of the day was that this was the END of our SUMMER OF ROCK. The next Validators gig isn't until NOVEMBER now (we're supporting The Wave Pictures in Nottingham) which is MUCH too far away! It's been a LOVELY few weeks of saying "See you next weekend!" to The Validators, I don't really want it to end!

Nearly 20 years ago I was Stan Cullimore in a Housemartins tribute band. We used to play all over the place but by far the craziest crowds we played to were in Leeds at a place called The New Roscoe. Any chance you could support Wave Pictures at their Manchester gig? Go on, do it, you know you want to.
posted 8/8/2016 by Chorizo Garbanzo