MJ Hibbett & The Validators: I Preferred Their Earlier Stuff

Compilations: I Preferred Their Earlier Stuff 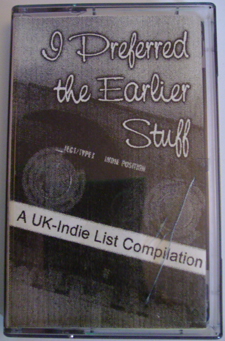 Very soon after I got email at work I joined the uk-indie mailing list, and pretty much since the start we always talked about doing a compilation tape. After years of faffing around Mr Frankie Machine took charge and this tape was produced. I Come From The Fens is the first song of mine he ever heard, while the version of Billy Jones Is Dead here is the version I recorded for possibly use on the Work Is A 4 Letter Word EP. Also featured here are Voon (with what was then an Unreleased Gem), The Fighting Cocks in their previous incarnation as Szeki Kurva, and Frankie Machine both in the unnamed Intro and Outro tracks and as part of the band Sienna.