Wednesday morning found The Scores On My Marksheet and I up and about early and heading into London Town to collect my mother from Kings Cross, for LO! it was finally GRADUATION DAY!

Originally we'd been told that my MA course would be graduating at 2pm, which would have been DELIGHTFUL. We could have had a leisurely morning, perhaps a spot of lunch, and then after the ceremony relaxed in a PUB. They changed it to 10am a few weeks ago though, which mean some hurried re-arranging and a terrifyingly early start which felt, to me, like it wasn't early ENOUGH. I'd worked out the timings for collecting Mum and getting to The Barbican in time, but it all felt VERY tight. When I catch a flight I like to aim to be there before check-in even OPENS, this time we'd be arrived just before GOWN COLLECTION finished!

It all went all right in the end, though I did have a slight panic when I realised that Mum DOESN'T have an Oyster card, but the queue didn't take long and we got to the Barbican in good time. We collected tickets, got gowned up, and I was sat in my seat (with The Audience In My Auditorium and mother on the other side of the hall) well in time for the ceremony. PHEW!

As we waited we had a chat and glanced through the programme. Louisa, sat next to me, said "Well done on the distinction!" and I was SURPRISED as I had modestly hem hem not mentioned it, but it turned out that it was marked next to the names of those who had got one, which was OBVIOUSLY MORTIFYING for me (I mean gosh, I mean golly, really chaps) but also FUN for finding out who else had got one! It also showed that we were right near the start of the ceremony, which was GRATE, i thought, as it meant less waiting around.

As it happened it didn't make much difference as there was two whole hours of sitting around, clapping every single person who crossed the stage to get a certificate (TWICE if they got a Phd), and after the first HOUR it all became a BLUR of black robes and hats differentiated only by SHOES. My bit went by in a FLASH - I couldn't resist a wave to the audience and then suddenly I had my bit of paper and was DONE. I guess it's meant to feel like a Big Moment but in all honesty it felt like just a bit of PROCESS. Getting the results felt HUGE, but the fact that most of us are keeping in touch (and are putting on a show soon) meant that I knew I'd be seeing people again soon so nothing was particularly ending.

Still, it WAS fun seeing everybody all poshed up, and it was very nice to go and talk excitedly to chums and their PROUD FAMILIES afterwards! There was even free BOOZE, as evidenced in this candid snap: 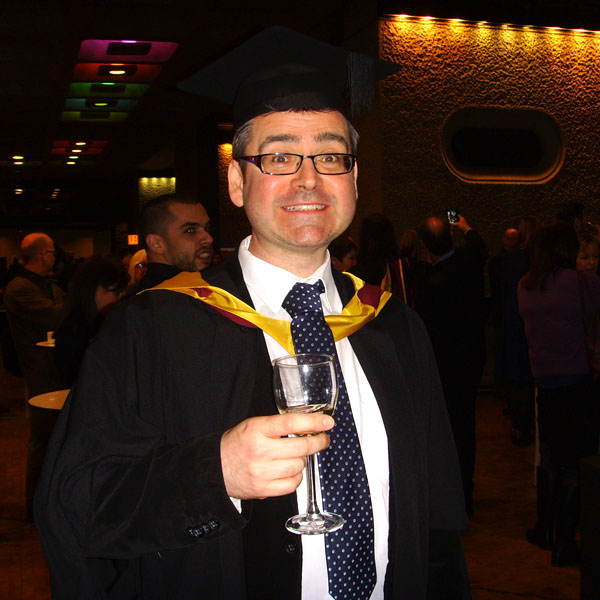 When all was done me and Mum went for a slightly boozy lunch and The Signature On My Certificate went off to work. It's been a long old JOURNEY since she and I first talked about me doing an MA but, as I've said every other time there's been one of these "endings" for the course, it feels like it's just the first part of something. I certainly hope so anyway!