Blog: The Museum Of Computing History

Saturday found me undertaking a FLYING visit to Cambridge to do a short set at The Centre For Computing History before a screening of the film Bedrooms To Billions.

I've been playing gigs for well over a quarter of a century, so you'd think I might have realised by now that when people say "Soundcheck at 6pm" they don't actually mean "The soundcheck will happen ONLY and EXACTLY at 6pm and if you're not there THE SHOW IS OFF", but it seems not for LO! I RACED through the backstreets of Cambridge (noticing, as ever, that people in Cambridge are MAD for putting posters in their windows - they bloody love it!), practically RAN through an industrial estate, and found a surprised Aidy From The British IBM clearly NOT expecting me to be there at 5:59pm!

We went and looked at the classroom I'd be playing in, decided I really wouldn't need a PA, then had a tour of the museum. COR! It was BRILLIANT! They had a TONNE of old computers, many of which were ON and ready for playing, similarly enabled arcade machines (including a proper table Asteroids machine which was BRILL), the original artwork for the ZX Spectrum manual cover, a wall of tapes, and then THIS: 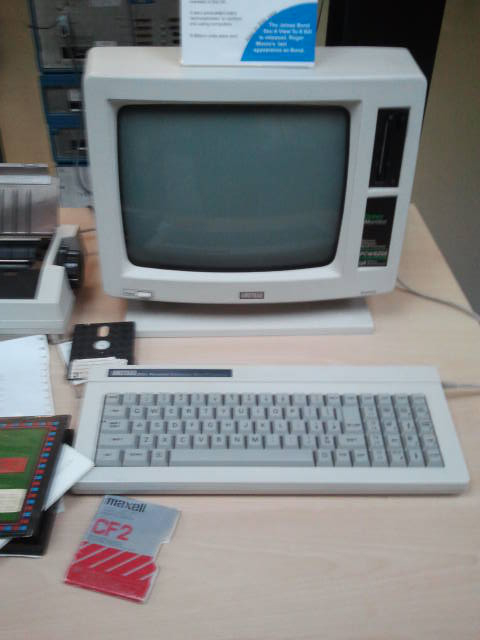 That may not look particularly exciting to the neutral observer, but it made me suddenly WELL UP with emotion, as it's the Amstrad word processor that I got for my 18th birthday (NB not THE machine, obvs, but the same model) and which went with me through my Polytechnic career. All of my first attempts at COMEDY RITING were done on it, and also a few essays (NB NOT MANY). I stood and stared at it for AGES... then went and spent half an hour playing DIG DUG in the main room.

By then it was getting close to SHOWTIME. I was very very aware of my train times home and was eager to get things moving, so ended up following Aidy around the building as he rounded people up, him being polite and me saying "Come on! this is happening! NO ESCAPE!" We herded approx 35 people into the main classroom, turned the lights on, and then I did THIS:


Some of these songs were performed as "single versions" i.e. my BRANE was nervous and so I missed bits out! The reason for the NERVES was because this was, after all, a screening of a FILM so I got the impression that none of the people trapped in the room had actually come to see ME and, indeed, most of them hadn't realised I'd be inflicting myself upon them before they could watch the film! Also, when I've played these sort of gigs before, Hey Hey 16K has gone down well while other, Less-About-ZX-Spectrum, songs have done markedly LESS well. I thought that if I explained all this before I started it might help, and the audience seemed to go along with it, although it was fun to look out and see the range of expressions from DELIGHTED to CONFUSED, from POLITE to MILDLY IMPATIENT. They were all very nice about it though, and several of them definitely appeared to like it!

As soon as I'd finished I packed up, pausing only to be greeted by another former Peterbrugian who, it turned out, used to live near All-Saints Church Hall (as mentioned in The Peterborough All-Saints Wide Game Team (group B)). I very very rarely meet ANYONE from Peterborough (apart from OBVS when I go there) so this was rather lovely, though I didn't have long to chat as I had to thank Aidy and then RUSH for the station. I hot footed it back through the poster-augmented side streets, over a rather bouncy pedestrian/bicycle bridge (which made me seasick whenever a cyclist passed me) and arrived at the station SWEATY but on time.

ALAS my train wasn't, so I had 15 minutes waiting during which I MUSED upon the gig. It definitely fitted into the category of "Gigs Other People In Bands Don't Seem To Do" and in some ways I can see why, but then again it was a very pleasant gig in front of people who otherwise I'd probably not have met, I DID get to meet a fellow Peterborough escapee, DID see my old computer and, VITALLY, got on the high score table of Asteroids! Other People In Bands should do MORE of these sort of gigs, they're smashing!!