Blog: From Pilot To Series

Monday evening found me heading for Theatre Delicatessen again to do some more filming with Mr John Dredge. A few months ago we'd filmed a "pilot" for a new series of sketches we want to make (calling it a "pilot" sounds Mr & Mrs Wankerton-von-Toss, but that's still kind of what it was) and we were regrouping now to film a series of THREE episodes, all in the space of two hours. As I sat on the tube on the way there I went through all the things that I'd packed into my special Laptop-Carrying bag - the camera, the sound recorder, a couple of props. Yes, I thought as my train neared Farringdon, I'd brought everything I needed, all packed into my special Latpop-Carrying Bag.

Everything except the actual laptop. Which would be used throughout. And is part of the script. CURSES!

I met John outside the building and apologised profusely, for LO! I had been a bit of a twit. "I'm sure we can borrow an old laptop though", I said, confidently. "Every office has a broken laptop in it somewhere."

John wasn't so sure, and when we got to the reception desk it looked like he would be proven correct. "Could we borrow a laptop?" I asked, and the lady shook her head. What a question! "A broken one will do", I added. "AHA!" she said and LUNGED for a drawer where, lo and behold, there lurked an entirely kaput laptop. Every office has one!

Upstairs in the rehearsal room we discovered our NEXT challenge: building the set. Last time we were there we'd created a small office environment using various desks, sheets of wood and STUFF that was hanging around. SINCE then, however, it seems that Theatre Delicatessen has had a bit of a tidy up, as the piles of ASSORTED JUNK, tables and STUFF had disappeared. We wandered up and down the corridors PEERING into other rooms, only to find the same thing everywhere, until we spotted one room with a HUGE grey board in it which would be IDEAL for us to use as a false wall. We crept in and asked if we could borrow it. "That's actually our set," said the theatrical troupe who were in there. They were VERY nice about us basically barging in, and we crept out again full of apologies.

Undeterred we scouted round and BUILT a desk out of lumps of wood then set the camera up so that (hopefully) you won't be able to tell that we were in a VAST OPEN SPACE rather than a tiny little room. Here's John, checking the shot: 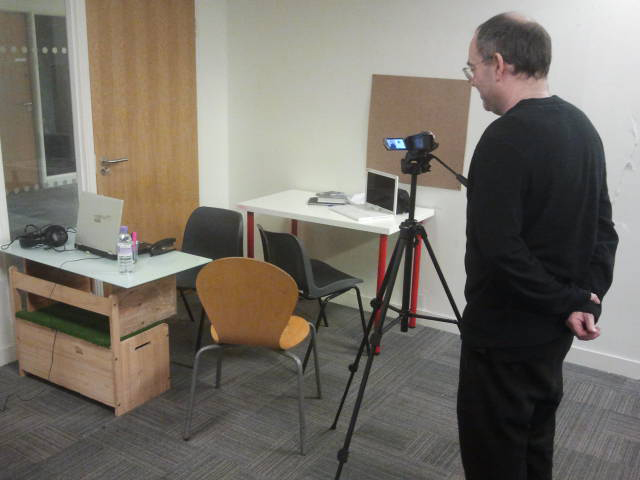 Once that was all done everything got a lot easier, although we did find time to implement a radical new idea for film making i.e. we REHEARSED the scenes BEFORE we filmed them, not during. I know, I know, it sounds KRAZY but trust me it sort of worked. We did each of the three scenes in order with both of us on screen and then went back and did all three with a close-up on John and a close up on ME, as well as a couple of other BITS. We got it all done JUST in two hours, and now I have the delightful task of matching sound and vision and then MIXING it. I hope it works out - we LARFED a LOT while we were making it, it'd be great if we could actually SHOW people this version!