I had a THRILLING ENCOUNTER last Thursday lunchtime. I was just sitting down with my sandwich in the EAT next to my work when I heard a Scottish Voice that sounded familiar. I looked up and LO! chatting to someone as if it was perfectly normal was David Tennant off the telly!

This was QUITE EXCITING, but I managed to stay cool about it, as indeed did he (I'm sure I heard him nervously humming "Hey Hey 16K", but apart from that it was if he hadn't even spotted me). One of the more FUN things about working in the centre of That London is that you DO occasionally spot famous people wandering around, and it set my mind to thinking about the OTHER famous people I'd seen. "I saw Christopher Ecclestone over the road at the Optician once," I thought,"and Tom Baker looking worried in a Pret A Manger."

"Hang on," I thought some more, "That's THREE Doctors Who!" I'm sure it's technically "Doctor Whos" but that looks weird written down, and "Doctors Who" is also more fun to say. Anyway, just as I was thinking how COOL that was I suddenly remembered that I'd ALSO seen John Hurt just round the corner in The One Tun pub a few years ago (my friend Simon went to speak to him but he was not really in any fit state to chat. He did ask me where the toilet was though, so technically we have MET), and then that I had ALSO seen Sylvester McCoy in The Museum Tavern!

That's FIVE Doctors, all within a very small area - an area which can be plotted THUS: 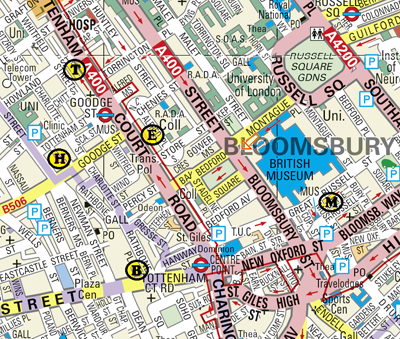 As I mulled this visualisation over I wondered if there was a PATTERN and so decided to investigate further with the following ANNOTATIONS: 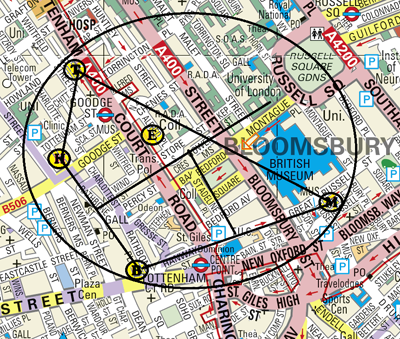 I can't really see a pattern of the individual Doctors - they don't seem to be arranged in terms of age or order or anything - so I am open to any suggestions anybody else may have. It MIGHT be that New Series Doctors are in one half of the circle (using Percy Street to Montague Place as the dividing line) but I'd need more data to know for sure. If I spot Peter Capaldi outside ULU on Malet Street, or Peter Davison looking lost outside Tottenham Court Road tube, then this theory will be PROVED!

What I can predict with some certainty, however, is the location of Paul McGann. As the JOIN between old and new he must surely be somewhere in the dead centre of the circle which is, I reckon, at the end of Gower Mews. I can't see him on streetview, but I'll pop and have a look next time I'm passing - if you don't hear back, you'll know I've gone off with him for some ADVENTURES in time and space!