The New Year began with us being DEAD SOPHISTICATED and heading out for EVEN MORE ART, as myself and The Hangings In MY Gallery went to the Tate Britain for a look around. We had a full itineray of THE ART planned, but got even more than we bargained for when we arrived to see that the front of the building was ALSO Art. It had been decorated by the Artist Anne Hardy to look POST APOCALYPTIC, with torn banners, lights falling off, and ice and snow on the steps. There were also sound effects like THUNDER and raging seas. It was dead good!

Once inside we headed into the William Blake exhibition, which was ALL RIGHT. It certainly gave you a broad picture of his life and what he DID, and it certainly generated a LOT of Intellectual Discussion between the pair of us (all right mostly The Lines Of My Drawing) about how MODERN it was, and how similar a lot of his thinking was to modern comics, but there was nothing in it that really made either of us go "WHOO!" Part of the problem was that there was just SO BLOODY MUCH of it. It took FOREVER to get through, with each room PACKED with STUFF, often in the form of Very Small Drawings with a lot of TEXT to tell you about them. We agreed that it would have been A LOT better if there had only been a THIRD of the content - I know it is a Blockbuster Exhibition that people PAY for, but come on curators! CURATE!

We then went to the cafe for a LOVELY cake, an all-right beer, and quite possibly the WORST cup of coffee ever created. It was like MUD that had been left to go off and then had vinegar added. UGH!

Things picked up after that, however, when we went to look at Year 3 by Steve McQueen. This is a HUGE Project where Steve McQueen invited EVERY Year 3 pupil in London to have their photograph taken, and it ended up containing SEVENTY SIX THOUSAND children in Class Photographs variously GRINNING, GURNING and everything in between.

It was COMPLETELY WONDERFUL and astonishingly MOVING. To start with we looked at the pictures one by one (or tried to, they go up to about 20 feet above the ground), then stepped back, then stepped in again to look more closely, and back and forth around the HUGE room with photographs EVERYWHERE. It felt like the entire FUTURE was in the room, all together, bunched up looking a) massively diverse but also b) just a bunch of kids with their teachers. Apparently, once the exhibition is over, all the pictures will be sent to the individual schools i.e. split up, just like the kids themselves one day will be. I teared up a bit when I thought about that. The Clothes In My Uniform made the Interesting Points that a) most of the male teachers looked like they should be in Indie Bands and b) almost all of the schools had some sort of UNIFORM, while I noted that c) approx 50% of London schools have exactly the same climbing apparatus on their wall.

It was, individually and en masse, UTTERLY BEAUTIFUL, also FUNNY and TOUCHING and HOPEFUL. Of all the things what we saw on our two ART DAYS this is the one I'd recommend most!

After all THAT we went to look at O' Magic Power Of Bleakness by Mark Leckey, which is a recreation of the underside of a motorway bridge, with FILMS playing and WEIRD EFFECTS and stuff. My favourite part was when we walked into what appeared to BE the underside of a motorway bridge where a medium-sized crowd had spread themselves out to watch stuff. It was Quite Good, but I did get slightly SPOOKED when it all turned a bit BLAIR WITCH with the videos.

With our gallery trip complete we then walked up to Parliament and saw the Christmas Tree there, to Trafalgar Square for ANOTHER (slightly less impressive) tree (plus German Market) and then to Covent Garden for ANOTHER Tree (best of the lot) and a GORGEOUS use of LIGHTS where they'd taken a whole street and basically outlined the whole thing with Fairy Lights. It was Somewhat Atmospheric! 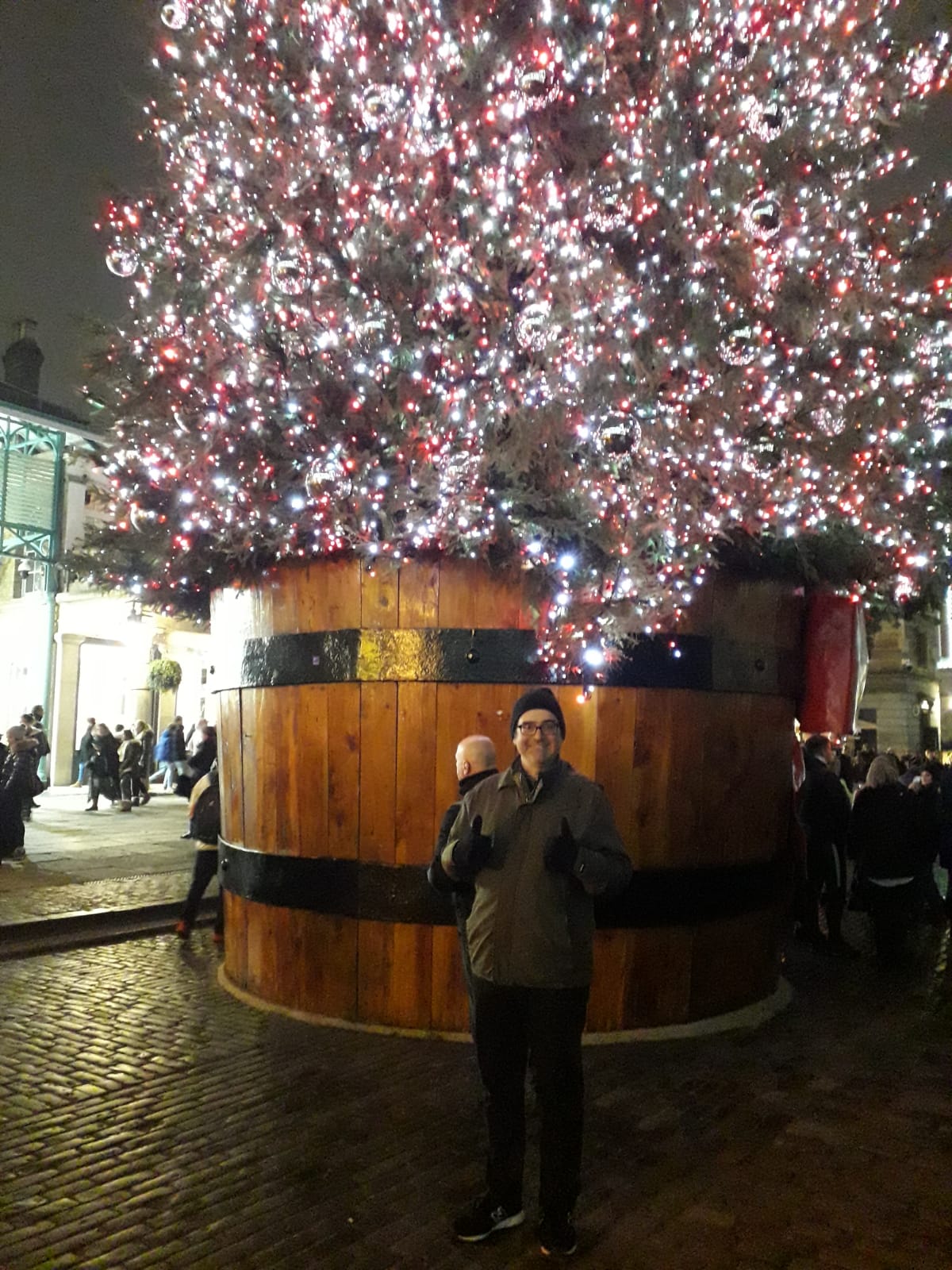 We then stomped some more down to Leicester Square then took a SCENIC ROUTE (which was definitely not me getting us lost) to Regent Street and Carnaby Street for MORE lights. It was a) lovely b) super-Christmassy and c) KNACKERING!

It was an EXCELLENT way to end what had been a BLOODY GRATE Christmas break. The working week was going to be hard-pressed to match it!

That Steve McQueen class photo project is indeed great, sorry, GRATE. Those photos looked even better when they were put up on large billboards around London - in tube stations but also next to, say, Staples Corner - for a period last year. Sadly this was only for a couple of weeks, https://www.artangel.org.uk/year-3-project/
posted 8/1/2020 by jg