After work on Friday I met with Mr S Hewitt and chums in Fashionable Islington's Fashionable Craft Beer N1 in preparation for seeing The Just Joans later that evening. It's quite nice, Craft Beer N1, although for some reason the table we were sat at had rather high seats, so there was a lot of going "OOF!" whenever one needed to clamber down to go to the bar.

The pub featured a gentle stream of people coming and going to the same gig, and for this reaosn it was not until after 9pm that Steve and I wandered down the road to The Lexington and into a mini-Indietracks of delightful people. I bumped into Mr J Osborne (POET) and Mr J Jervis (LEGEND) almost immediately, and spent large parts of the rest of the evening seeing people I hadn't seen for AGES. The gig was part of the Winter Sprinter, a FOUR DAY series of gigs for which people had come from far and wide, which meant the room was PACKED with familiar faces. It was lovely!

The gig itself was BLOODY FANTASTIC. Steve and I watched from our usual position in the EXECUTIVE SUITE (i.e. the far end of the bar at the back) where you get a GRATE view, as can be seen below: 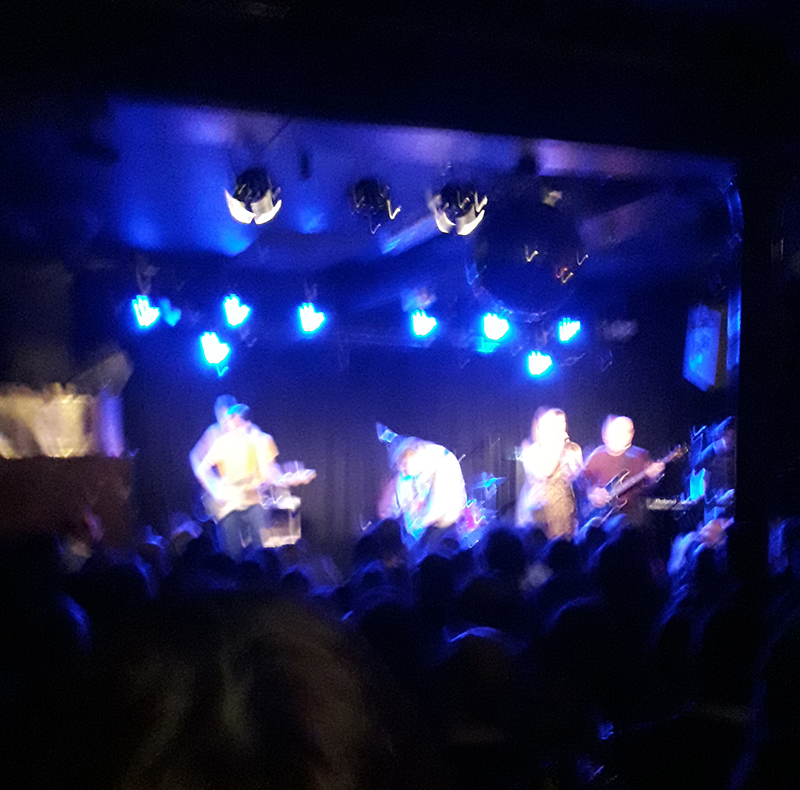 No, that picture wasn't nicked from a high quality music periodical, I took it myself, honest!

As has been noted on many previous occasions, the full-band live version of The Just Joans is a ROCKING PROPOSITION, and they have SO MANY HITS nowadays that they can do a whole set FULL of them and still have some to spare. They are also GRATE fun to watch - David is an EXCELLENT frontman, and many were the LARFS between songs. They are basically the last survivors of the Holy Indie Triumvate of Allo Darlin/Standard Fare/Just Joans (they are PULP to the others' Blur/Oasis) and so there was MUCH love in the room, especially when they did songs like "What Do We Do Now" which are ABOUT thinking nostalgically about friends and bands you used to know and now INDUCE exactly that.

The gig was a launch for their (excellent) new album The Private Memoirs And Confessions Of The Just Joans and happily the new songs what they played off it MORE than matched up to THE HITS. I bought a copy from Mr Jervis on the way out and would HEARTILY recommed!

It was a lovely night, but to be honest it was a bit disconcerting to be back at a GIG again with people I knew, doing something I used to do ALL the time but don't really much anymore. It didn't make me want to rush out and start GOING to loads of gigs again - not least because, to PARAPHRASE "What Do We Do Now", most of the bands that I loved back then ARE dead, and though the people I used to see at those gigs are still with us, they only go out to gigs about the same amount that I do i.e. a couple of times a year - but it was brilliant to dip my toe back in again for a bit. Maybe I WILL go to Indietracks this year and do it again!

Aw, lovely. First time I saw the Joans was when you and I played with them in Glasgow!
posted 14/1/2020 by Pete Green