On Thursday night myself and The Bulb In My Lamp went over to Canary Wharf to look at Winter Lights. I must admit I thought it was going to be a brisk stroll around a few underwhelming light thingies, but in actual fact it was GRATE, and ended up being nearly two hours of us walking around Canary Wharf going "OOH! Look at THAT!"

There were 26 different sculptures spread around the whole of Canary Wharf, linked by lots of Surprisingly Good Signage and an EXCELLENT (if slightly oddly numbered) map which took us round the whole lot with ease. There were lots of staff on hand giving these maps out, and LOADS of people using them. Again, I'd thought it'd be just us but there were HUNDREDS of people trekking round, all having a LOVELY time. It reminded us both of London Lumiere which we went to a couple of years ago, except with less MASSIVE things but the whole thing much more compact and easy to get round.

Amazingly for something like this there was nothing RUBBISH or annoying, and (incredibly for something relying so heavily on electircs) everything WORKED! Highlights included an incredible sculpture that broadcast words onto a moving fall of water which... actually, rather than me trying to say what it was, here's a video someone else made:

There was another one showing light on MIST called "Constellation" that looked AMAZING, a fab garden of light called "Squiggle" and what looked like a Christmas Tree forest, modelled here by your correspondent. 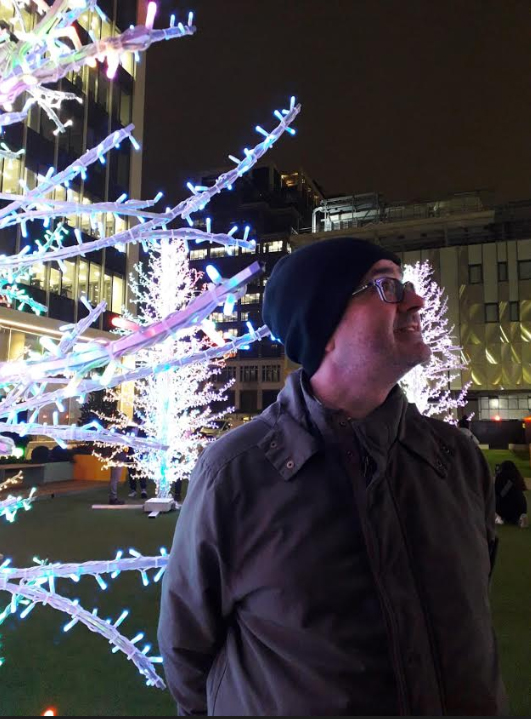 I think my favourite was an INSTALLATION called "Chromatic Play". We had to queue up to get in, and when we did it was just some rather underwhelming half-globes in the ground that looked a bit like slime monsters. They were meant to be sensory, so everyone vaguely waved at them but it didn't seem to do much... until one of the guides came in and explained EXACTLY how it worked, with them changing colour according to people standing near or far from their sensors and then with each other. She explained it all so clearly, getting us all to step backwards and forwards to make it work, that something that had seemed disappointing suddenly made SENSE. As The Words On My Description said, if ALL Installations had someone like this to explain them it would help REALLY A LOT. I concurred!