A very happy RELEASE DAY to one and all, for the day has finally come when I can say that our new EP, People Are All Right is OFFICIALLY OUT! 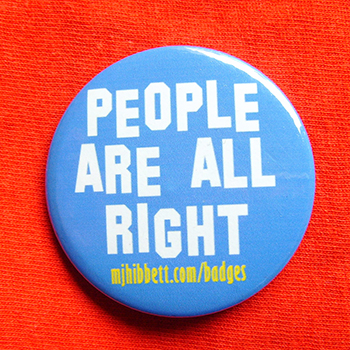 By HECK but it's been a long time coming - I wrote the song about two years ago, since when we've had to learn it, record it, mix it and then get it all ready for streaming and so on. I don't mind MOST of that process - we always do stuff at this kind of glacial pace, but at least when we're learning and recording we get to go to the PUB afterwards - but the preparing for streaming has been a right old pain in the wotsits. As discussed previously, the whole thing was ready a couple of MONTHS ago but then we had to leave plenty of time so that Bandcamp and Spotify could have a listen to it for possible inclusion in playlists. I said a while back that this was very similar to the way it used to work with monthly magazines and this has continued to be the case insofar as they used to ignore us too!!

But now we are GO which means I can start UNLEASHING the promotional material that I've been sat on for ages, notably this VIDEO what we did, featuring a great young actor called Jimmy Stewart:

It uses footage from the 1941 movie "Pot O'Gold", which is now out of copyright. The clip in the video was hardly edited at all, and it was WEIRD watching it back as I kept noticing the actors reacting to the lyrics, and had to keep reminding myself that they weren't at all. The whole thing works surprisingly well I reckon!

All being well we'll have ANOTHER video out later this week or early next, but in the meantime if anybody's got any ideas about how I could promote the single a bit more I am ALL EARS. Gigs and Radio Sessions are not really an option at the moment, so I'm not sure what we should be doing!