Hair: CUT!
On Monday of this week I ventured into Actual London Town for the first time in nearly FOUR MONTHS, for a VITAL and entirely ESSENTIAL task: I was going to get my hair cut AT LAST!

I tell you what, in The Before Times when I read all of those FICTIONAL post-apocalypse stories there was a lot of talk about getting fresh water, weaponry, food etc etc but none of them ever mentioned you that the thing I was going to miss most of all was a HAIRCUT. I needed it cutting before everything kicked off, so four months in I looked like a MANIAC.

So it was that as SOON as the Government gave the go-ahead for hairdressers to re-open I booked on the first day available, and on Monday I set off into town on my usual commuting route. I must say, I was a bit disappointed to find that it wasn't really weird at all. Yes, there were signs in the station, and even POLICE on the platform, but otherwise it was like going in on a Sunday. It didn't even feel unusual, my BRANE just went "Oh yes, getting this train, that's something we know how to do." The only time it got genuinely SPOOKY was when I walked through Bloomsbury, and it was QUIET. I don't mean on the pavements - there were people about, and it felt pretty much like a Sunday again - I mean the traffic noise, of which there was Considerably Less. I worked in Bloomsbury for years so I guess I had got so used to the constant RACKET that its sudden absence was louder than anything else.

Anyway, I got to my HAIRDRESSER who cut my hair and did a right good job of it. Here is the Before and After so you can see for yourself! 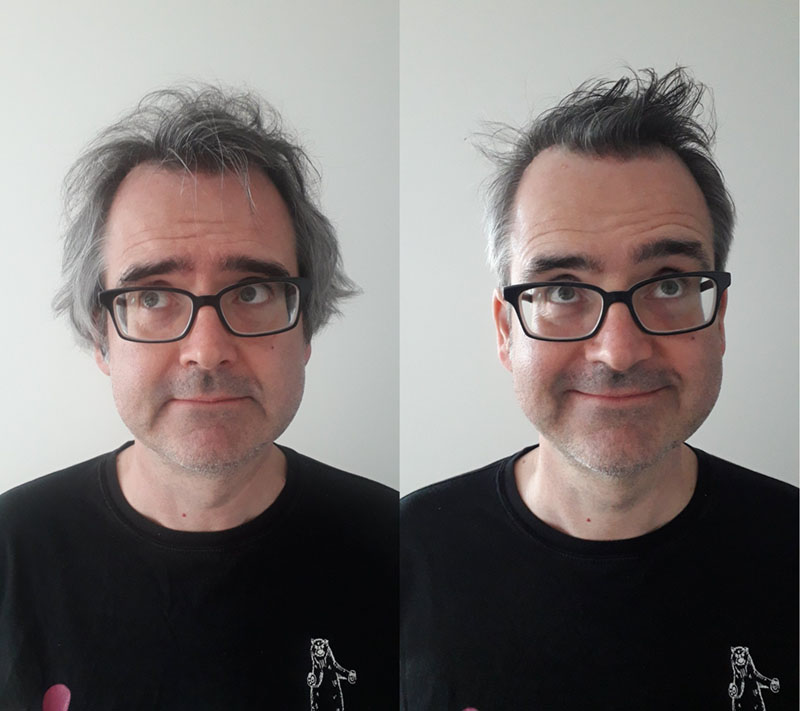 (photography by Teeth In My Comb, hair-gel by My Hairdresser, daft expressions model's own)
As you can probably tell, I was RUDDY DELIGHTED by the whole experience - looking like a MAD PROFESSOR is all well and good for a Fun Party or if you ARE a Mad Professor, but it doesn't half get annoying over the course of several months!

On the way home I popped over to look in at The King & Queen, who I was DELIGHTED to see had a notice in their window announcing they were re-opening next week. I don't think I'll be back in town again by then, but it was nice to know it'll be there when I eventually DO!


An Conference
Crumbs, has it really been almost a month since last we gathered for blogging? Doesn't time fly when you're not really doing much to do with ROCK?

What I HAVE been doing, however, is helping to organise a CONFERENCE, which has been Quite Exciting. It's the International Graphic Novels And Comics Conference which I've previously mentioned attending in other years in Manchester, Bournemouth and Dundee. This year it was meant to be UAL's turn to host it in That London, and as that is a) where I am doing my PhD b) where I WORK I was involved in the DOING of it.

So, when The Current Situation kicked off I was a bit disappointed when it looked like it was all going to be cancelled... until I BEMOANED the situation to The Delegates On My Registration List who suggested that we do the whole thing online instead. This was a GRATE idea, and so that is what we DID! We asked all of the presenters to PRE-RECORD their presentations and then upload them to our Figshare site, and then the conference itself was a mix of Workshops, and Q&A sessions done on Blackboard Collaborate. The idea was that people could thus look at the presentations any time they wanted, and then have plenty of time to talk about them afterwards.

It was a HECKLOAD of work, not least for me as I was looking after the Figshare side of things, which involved three items which SHOULD NEVER BE MIXED: Academics, Technology, and Deadlines! Eventually though we got it all sorted out between the four of us who were running the event, all ready to kick off on Wednesday last week. It had been a LOT of effort, so it came as a bit of a surprise to us when we started to realise it WASN'T just a load of hassle for nothing, and that theere was actually loads of good stuff there. Furthermore, it all BLOODY WORKED!

This latter aspect continued to delight us through the next three days - IT WORKED! Loads of people got involved, all of the Q&A sessions were full of questions, and people seemed happy... very happy, in fact. The only major issue was that there waasn't anywhere to GOSSIP between sessions or in the pub afterwards, but other than that it worked as well - or BETTER - than a normal conference would.

And best of all, all of the presentations are online FOREVER for anyone to have a look at. Go on, have a look at The Conference HUB site, where you can find out everything that was going on and then link directly to the papers.

It was a GRATE experience all round, though flipping knackering. I'm just glad it's not our turn again next year!
posted 8/7/2020 by MJ Hibbett
(click here for permanent link)
(0) comments