Gigs Of The Past - Live At The Bull And Gate
Today's gig of the past was a GRATE one at The Bull & Gate on 29 January 2005 which we, especially ME, enjoyed a LOT, as you can probably tell from the rather excitable blog what I wrote the day after. As I said last time, these videos come from the brief time when we were on the "up", getting radio play and doing gigs regularly enough to generate an ongoing AUDIENCE - this one comes from 2005, a year in which I did 47 gigs with and without the Validators, and was the start of a HECTIC decade or so when I did over 50 gigs every YEAR! 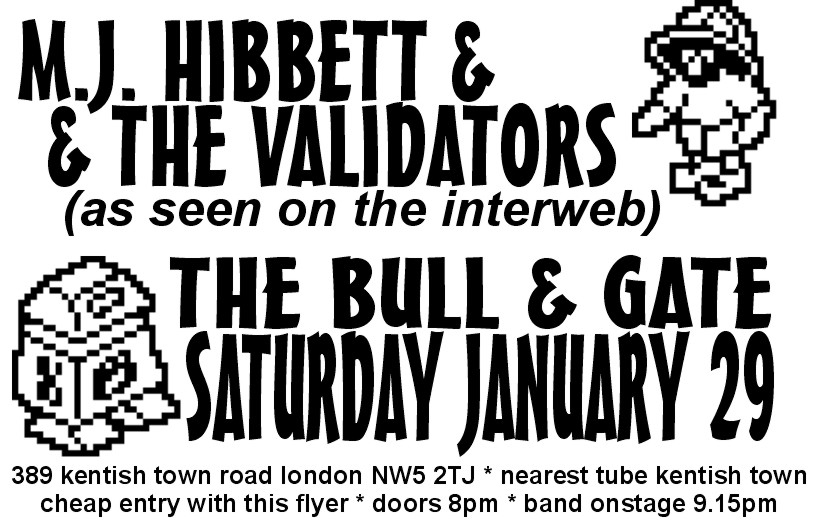 
Gigs Of The Past - Back To Hull
The other day I was having a look through one of my Drawers Of CDs And DVDs, specifically one of the ones where I keep stuff related to me and The Validators. These are relics of a fairly specific window in time when recording stopped being tapes, videos and DATS, but before it all went properly digital and online, so the stuff in there includes various rough mixes of things we recorded in the 2000s, our Actual Radio One Session (it's got the logo on it and everything!), and a few DVDs of gigs. I've often thought I should probably DO something with the latter and, inspired by the recent work of Sorted Supremo Dave Dixey in putting some of HIS mighty archive online, I thought I'd have a go myself.

THUS I dug out my USB CD/DVD drive, which thankfully still worked, and after various attempts finally worked out how to transfer the contents of a DVD to something you could upload to YouTube. It was really hard to get it working, but once I'd got it sorted it was PEASY so I did THE LOT! That means that over the next couple of weeks I'll be SHARING them with you. As I say, they're all from a fairly narrow window of time, between 2004 and 2008, but there's some fun stuff in there.

So, the first item is an almost complete recording of our gig at the Hull Adelphi in May 2004, recorded by the always marvellouos Mr Eddy Bewsher:

It was a FANTASTIC night - according to the original blog about it there were 150 people there to see us, which seems entirely unfeasible now, and was quite amazing then too. Rather wonderfully this era of DVDs also covers our very brief POMP when we were on the radio a bit, so there are audiences! We even got an ENCORE - it's not included on the video, which is probably for the best as it featured me forcing The Validators to play "I Can See Clearly Now" despite us never ever having playing it before. It still comes up in setlist conversations as An Act Never To Be Repeated!

Next time we've got a gig that we enjoyed SO MUCH that we paid ACTUAL MONEY for the video recording!


Transitions
On Saturday Mr FA Machine and I were booked to present our paper The Swingin' Sound Of Sixties Marvel at the Transitions Conference. This is a GRATE comics studies conference that I have attended and indeed PRESENTED at several times over the years, which focuses on Emerging Researcher i.e. generally people doing MAs or PhDs. It's always interesting so it was a HUGE shame that last year's version got cancelled due to The Current Situation, and thus also a DELIGHT when it was rescheduled as an online version this year.

I must admit I was really NERVOUS before our bit. As with the Ramones gig from a few weeks ago this was slightly DAFT as, again, the whole thing had been pre-recorded, so I knew full well that the presentation itself would be fine. I was more worried about the fact that Frankie and I were sandwiched between two papers that looked MUCH more "serious" than ours (i.e. were about Issues and not mostly two people singing). I always RAIL against people who think that something can't be Inportant AND Enjoyable, but it is something that is contained within mine own PSYCHE, as even though I KNEW that our presentation was entirely Academically VALID I was still worried that it might seem LIGHTWEIGHT. I was also hugely on INTERNAL ALERT about us being two Standard Middle-Aged White Men at a conference featuring a DIVERSE group of almost entirely much younger researchers. Again, I look ASKANCE at people who complain about Political Correctness and Wokeness, but there was still a part of me AFEARED that one or both of us would be CANCELLED!

Obviously this turned out to be as daft as it sounds, as the other presentations AND presenters were GRATE and EXTREMELY welcoming to two old twits with their singing. Riziki Millanzi gave a talk on the 'Angry Black Woman' stereotype in DC's "Far Sector" and Dina AlAwadhi talked about the "Occidental gaze" in the MCU, which made me want to a) read "Far Sector" IMMEDIATELY and b) watch all those films again. Brilliantly, once we got into the Q&A session it turned out that all of the other presenters AND the chair were MASSIVE COMICS FANS, and LO! there was a gleeful combination of ACTUAL PROPER ACADEMIC THORT and Getting Excited About GRATE COMICS. It was ace - there is definitely an older generation of Comics Types who actively try to be avoid being seen as FANS in case it makea them look Less Serious, so it is always lovely to see The Younger Generation of Comics Studies people not being worried about this AT ALL.

In amongst all of this delight there were many Serious THORTS proposed, with the chair and us four presenters even managing to find some THEMES that linked all the papers. The only shame of it was that we WEREN'T in the same room together in real life, and so the traditional WINE RECEPTION/NATTER was not available. Hopefully next year!

(PS I'm not sure if we're MEANT to UNLEASH our papers, but for now you can find ours on Vimeo!)


Twitching With Dredge
Yesterday evening I took part in an very jolly edition of The John Dredge Lo-Fi Show. This is a half hour of almost daily CHAT that John does over on Twitch, and he'd asked me on to have a CHAT and also to do a Fantastic Four quiz. I was DELIGHTED to do so, and had a lovely half an hour yacking away to him while gently forgetting that there might actually be people listening.

The QUIZ questions what I did were as follows:

1. Which one of these characters has never been a member of The Fantastic Four?